This post is intended to be an intermediate-level guide after you’ve gotten serious about buying a ring. It covers the practical aspects of setting a budget and finding the best deal via the cost-efficiency frontier (interactive tool screenshot above). Hopefully it will help you cut through all of the marketing spin and misinformation I encountered in my own diamond research.

If you’re completely new to diamonds, you should start by reading about the basics of the 4C’s. Then you should read a classic article about the diamond industry, “Have you ever tried to sell a diamond?” After you’ve progressed through the seven stages of grief and accepted that the evil geniuses of the advertising and diamond industries have you over a barrel, continue reading below to learn how to fight back with data.

How much does the average engagement ring cost?

If you search for this question online, you’ll find a lot of fluff articles with conflicting answers. Let’s go straight to some primary data sources:

Unmarried couples say they would like to spend $2,300 on an engagement ring. The national jeweler’s trade association says couples spend $4,000. After they get married, couples reported spending $5,600. How do we resolve the discrepancy between these numbers? 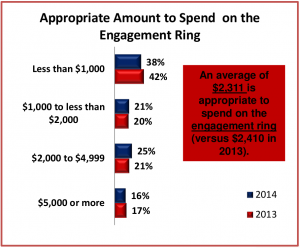 The majority of couples want to spend less than $2,000, but their price expectations are not in line with reality. Diamonds are expensive! I collected prices for all diamonds listed on James Allen (62896 diamonds on November 1, 2015). The histograms below show the complete diamond price distribution:

If the median price of a loose diamond is $2,960, then the $4,000 median ring price reported by Jewelers of America seems reasonable after accounting for the cost of the band. The high price reported by TheKnot is most likely the mean price of a ring; this is misleading because the diamond price distribution is heavily skewed. Do not be influenced by TheKnot’s price; a $4,000 median is closer to the real answer of how much the average engagement ring costs.

How much should you spend on an engagement ring?

How much the average ring costs and how much you should spend on a ring are two independent questions. Let’s assume Jewelers of America is correct and the median ring price is $4,000. The median household income for 25-34 year-olds is $54,243. Thus, the average couple spends 7.3% of their future annual household income on an engagement ring.

Studies have shown that consumer debt erodes marriage quality, contributing to the 50% divorce rate. The average household owes $16,140 in credit card debt, plus mortgages and student loans. Meanwhile, the average personal savings rate is currently 4.8%, well below the 8.6%-17.6% needed to save for retirement. If couples stuck to their original budget, they could use the difference in ring costs (4.4% of household income) to pay down credit card debt or meet their retirement savings goal for the year.

I believe most couples start with good intentions and intuitively understand what is a reasonable amount of money to spend on a ring (<$2,000, 2.9% household income). However, once they start shopping and see how much diamonds cost, they are swayed by marketing/social pressures and spend more than they would like ($4,000, 7.3% household income).

Ideally, you would spend 2.9% of your future annual household income on a ring.  The current average of 7.3% of household income should be the absolute maximum you spend on a ring. Trust your initial estimates, strive to be a better than average saver, and start your marriage on the right foot without additional debt.

If you search for “how much you should spend on an engagement ring,” you will encounter posts that describe how spending more on a diamond ring is associated with higher rates of divorce. These posts all cite an economic study entitled “‘A Diamond is Forever’ and Other Fairy Tales: The Relationship Between Wedding Expenses and Marriage Duration.” While it’s a convenient story, I doubt anyone has actually read this paper in detail. The authors built a Cox proportional hazards survival model to evaluate which factors increase the hazard of divorce. I work with survival models in my day job and I am skeptical of the robustness of their findings.

Additionally, I think there are problems with their statistical methods. None of the engagement ring hazard ratios were statistically significant in the combined model. Some hazard ratios were only significant after stratifying by sex, but they were inconsistent between men and women; higher ring costs were associated with a lower hazard of divorce in women (Table 2). Now, imagine if the wives of the men who completed the survey took the survey instead – divorce and the cost of the ring would still be the same, so why should there be a difference in hazards between these two groups of women? Further, if the proportional hazards assumption held as the authors tested, then a stratified Cox analysis based on sex should not be necessary because the base hazard rate for the two sexes could be assumed to be the same. These inconsistencies prevent me from citing this paper as evidence that higher ring costs are associated with a higher hazard of divorce.  Proponents of budgetary prudence will have to look elsewhere for evidence.

How do you find the best deal on an engagement ring?

Once you set a budget, how do you maximize it? The best way is to shop online. According to a study commissioned by Blue Nile, “A comparison of the average price showed that by going to a brick & mortar store, Americans are overpaying for the same quality ring by 72% at a leading luxury jewelry chain, 40% at traditional mall-based jewelers, and 18% at independent local jewelers, than by going to online jeweler Blue Nile.” Although Blue Nile sponsored the study, I don’t think there’s any doubt that online jewelry retailers offer better deals. With no physical locations and virtual inventories, they can offer lower prices on diamonds, just like Amazon can with books.

However buying online has two problems. First, if you buy online from Blue Nile, you’re buying a diamond sight unseen. This is a major obstacle for something as important and as expensive as an engagement ring. The solution is to buy from James Allen. They are the only online retailer that offers real 360 degree pictures of all of their diamonds.

Second, buying online presents a paradox of choice. James Allen offers more than 60,000 diamonds – too many to choose from. Even if I use the selection tools and filter based on color, clarity, cut, and carat, I still have to screen hundreds of diamonds. Thus, I lose all of the time I gained by not visiting physical stores.

To solve this problem, I collected diamond prices from James Allen and calculated the cost-efficiency frontiers for diamond price curves; this identifies the handful of diamonds that represent the best deals. For more information about how the cost-efficiency frontier informs optimal economic choices, please see my previous blog post. Instead of wading through hundreds of diamonds, I can now quickly focus on just a few of the best deals.  I’ve packaged this analysis into an interactive tool to help you explore James Allen’s inventory, shown below. 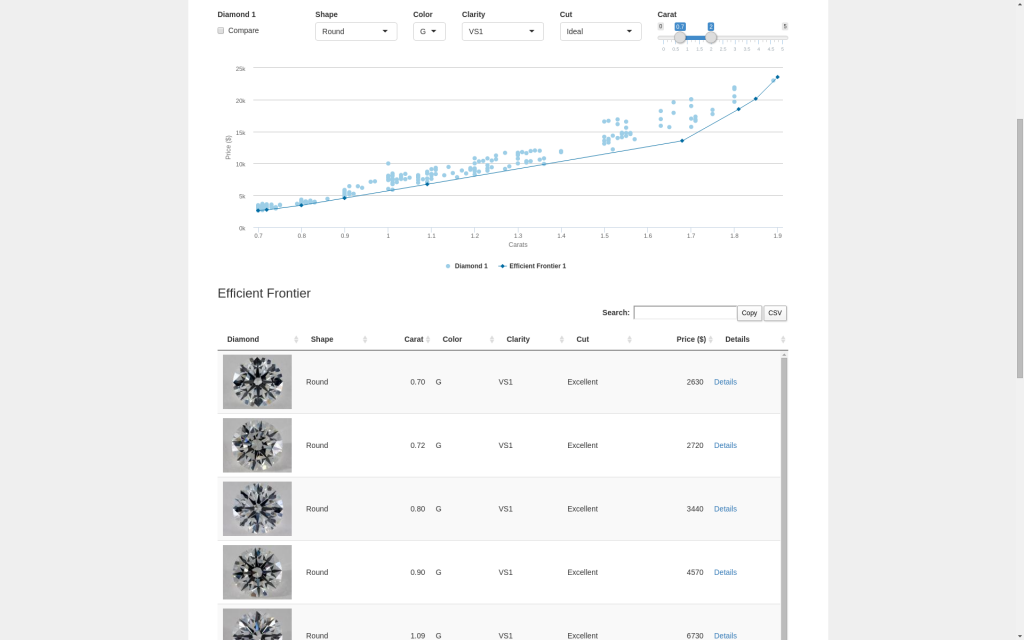 At the end of my data collection exercise, I concluded that I should spend approximately 2.9% of our future annual household income on an engagement ring (and certainly no more than 7.3%). I’ve also created and shared a tool that identifies optimal economic choices based on the cost-efficiency frontiers of diamond price curves from James Allen. For me, this was the most data-driven, logical way to buy an engagement ring.  To each his own: I hope you find the ring that best suits your needs.